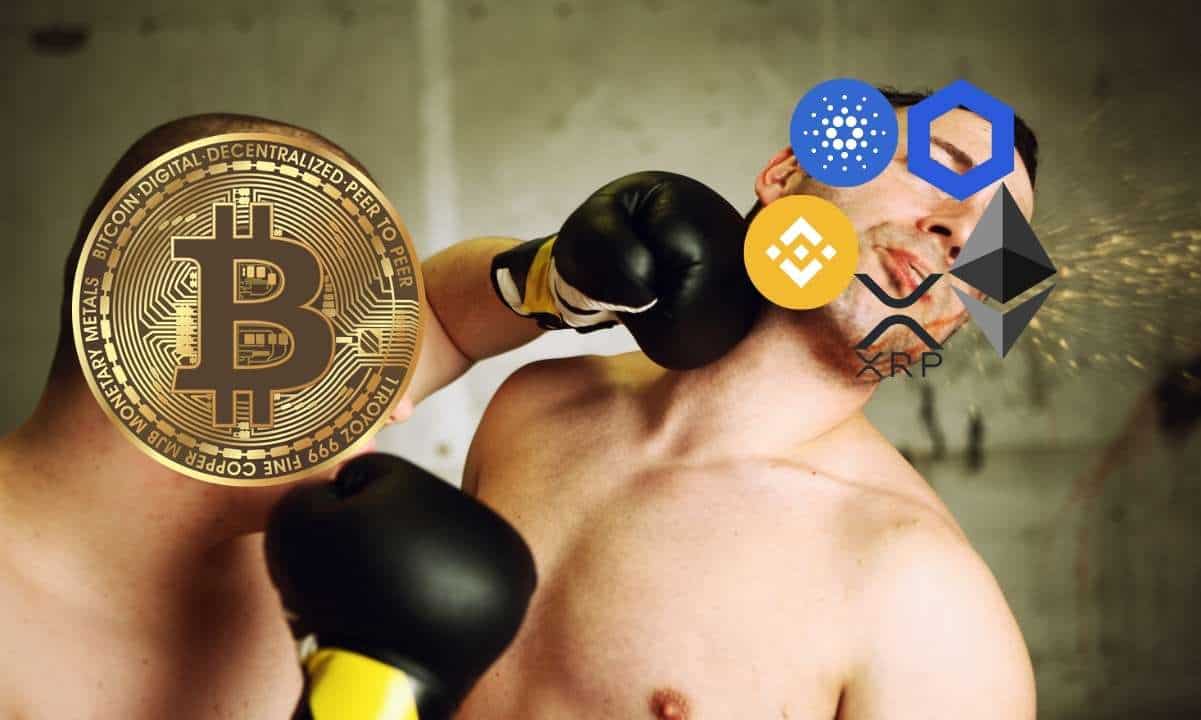 The past week saw a new trend starting to take shape within the cryptocurrency markets – one where Bitcoin remains relatively stable, whereas altcoins suffer. This has had its own consequences, so let’s unpack.

Over the past seven days, Bitcoin’s price declined by 4%. Even though this may sound like a considerable drop, the broader market a heavy beating. Altcoins came crashing down a lot harder than BTC, which resulted in a soaring Bitcoin dominance.

This is the metric that gauges BTC’s share relative to that of the entire market, and in the past week alone, it soared by almost 2.5% and currently sits at around 46%. With this being said, BTC’s price currently sits at around $29,000 after having dipped towards $28K earlier in the week. The cryptocurrency has closed the past eight weeks in the red, and it’s interesting to see how Sunday’s candle will shape up. All of the above resulted in a total loss of about $70 billion in terms of total market capitalization.

This was further attributed to the crash of the altcoins. Ethereum lost around 12% in a week, followed by ADA – down 12.2%, and Solana which saw a whopping 19% of its dollar value disappear. In fact, ETH hasn’t been trading this low against BTC since October last year. AVAX crashed even harder, losing 24% in the past seven days. Amid this bloodbath, TRX has appeared as the only top 20 cryptocurrency in the green. This is largely attributed to the release of its USDD algorithmic stablecoin.

Elsewhere, Terra’s community voted in and accepted Do Kwon’s revival plan for the network, which will see Terra 2.0 launch on May 28th. The new chain won’t include an algorithmic stablecoin (for obvious reasons). There’s also an airdrop scheduled for LUNA holders that should take place upon genesis.

All in all, it was an eventful week, albeit to the downside. It’s interesting to see how the next one will shape up, as there clearly are no boring days in crypto.

Terra 2.0: This is What LUNA Holders Need to Know. Do Kwon’s plan to revive the Terra ecosystem was voted in and approved. The new initiative won’t include a stablecoin, and it also plans to airdrop tokens to LUNA holders before and after the UST-LUNA crash that wiped billions off the market.

Bitcoin’s Pizza Day 12th Anniversary: ​​2 Pizzas for 10,000 BTC. This week, the industry celebrated 12 years since Laszlo Hanyecz spent 10,000 BTC on two pizzas. Albeit well-known, this story has a special place in the heart of crypto enthusiasts and especially in Bitcoin folklore.

Cathie Wood’s ARK Invest Files for Another Bitcoin Spot ETF. ARK Investment Management – ​​the company, spearheaded by the well-known fund manager Cathie Wood – filed for another spot Bitcoin exchange-traded fund (ETF). It’s called ARK 21Shares Bitcoin ETF and the SEC has until January 23rd next year to make a decision on it.

4 Years After Launch, Uniswap Reached $1 Trillion in Trading Volume. Four years into its launch, one of the leading decentralized exchanges and automated market makers – Uniswap – has achieved a massive milestone of processing over $1 trillion in total trading volume.

This week we have a chart analysis of Ethereum, Ripple, Cardano, Solana, and Tron – click here for the full price analysis.