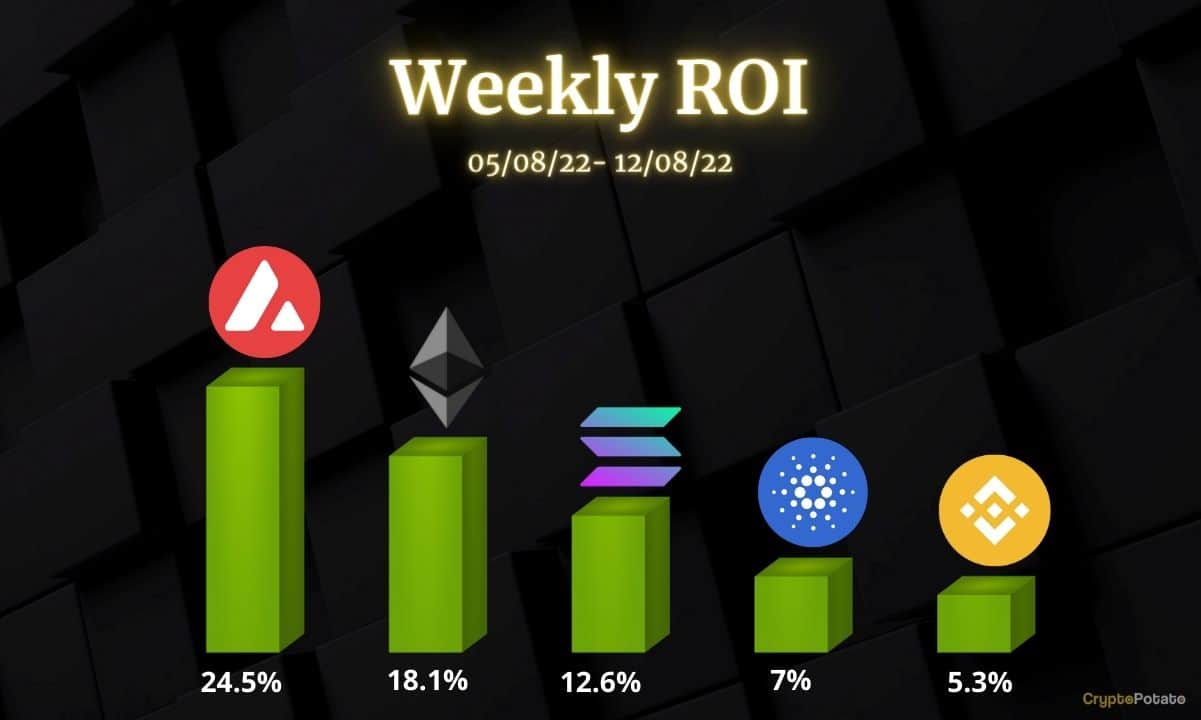 This week, we take a closer look at Ethereum, Binance Coin, Cardano, Solana, and Avalanche.

Ethereum has reached prices not seen since May and is close to $2,000. This latest bullish momentum has pushed the price up by 18.1% in the past seven days, making this one of the best weeks for ETH.

However, the cryptocurrency is now just under the key resistance at $1,900. Ethereum will have to break this point if its bullish momentum is to continue. Bulls appear to have lost some strength after the rally and may not be able to push the price higher at this time. For this reason, ETH could revisit the support at $1,720 first.

Looking ahead, the indicators for ETH remain bullish, and it has outperformed Bitcoin. This is because the ETH transition to Proof of Stake is now due to happen around September 15th.

BNB appears to have hit a pivotal resistance point at $332. The price has failed to rally higher for a few days now, and momentum appears to be shifting in favor of bears. Nevertheless, it still managed to increase by 5.3% in the past seven days.

Since June’s bottom, BNB has almost doubled in price and managed to sustain a significant rally. Considering this performance, the bulls appear to show signs of exhaustion, which may allow bears to take over the price action. If so, the cryptocurrency should find good support at $267.

Looking ahead, BNB may correct in the near future as sellers take over. The RSI is also found in the overbought zone and is falling. This also confirms that bulls are losing control of the price action at this time as they appear overextended.

Cardano has not managed to break above the $0.55 resistance level for two months now. The latest attempts in August were also rejected by the bears. Even so, ADA still managed to book an increase of 7% in the past seven days.

ADA has formed a clear ascending triangle represented in blue on the chart. The price is at the apex of this formation and will likely break away from it soon, which will lead to increase volatility. It is uncertain if ADA can break above it, but if it fails, then good support is found at $0.50.

The indicators are bullish for Cardano, but the momentum is not really behind them. Hence, this bias can be misleading, particularly because the volume has decreased with each touch of the key resistance. Without increasing volume on the buy side, ADA will not be able to break above the key resistance.

Similar to Cardano, Solana is also struggling to move beyond the key resistance at $44. So far, it has failed to produce a clear breakout, and all previous attempts were rejected. This latest attempt did rally buyers, and SOL registered a 12.6% price increase in the past seven days, but it still failed to close above $44.

SOL’s price is also found in a large ascending triangle and is being compressed in the apex of this formation. A major breakout should be expected in the next few days. While the indicators are bullish, buyers should be careful, considering that all attempts to rally higher were rejected in the past.

Looking ahead, the cryptocurrency may attempt to break the key resistance and move towards the next target at $60. The volume in the past two days favors buyers, which also gives confidence in a possible breakout. Should SOL fail to do so, then the key support levels will be found at $40 and $35.

Avalanche managed to double in price since bottoming in June at $13.7. With the cryptocurrency now close to $30, AVAX had an excellent week, increasing by 24.5%. This makes it the best performer on our list.

The key support is found at $27, and the next major resistance is at $38. There is still plenty of room for AVAX to go higher before facing the key resistance, but a pullback to the support is likely as the bulls regroup from this most recent rally.

The price action and indicators give a clear bullish bias. The RSI has not yet reached overbought conditions considering this price increase, highlighting that AVAX could move higher before any significant correction. For this reason, it’s important to watch the key resistance at $38.