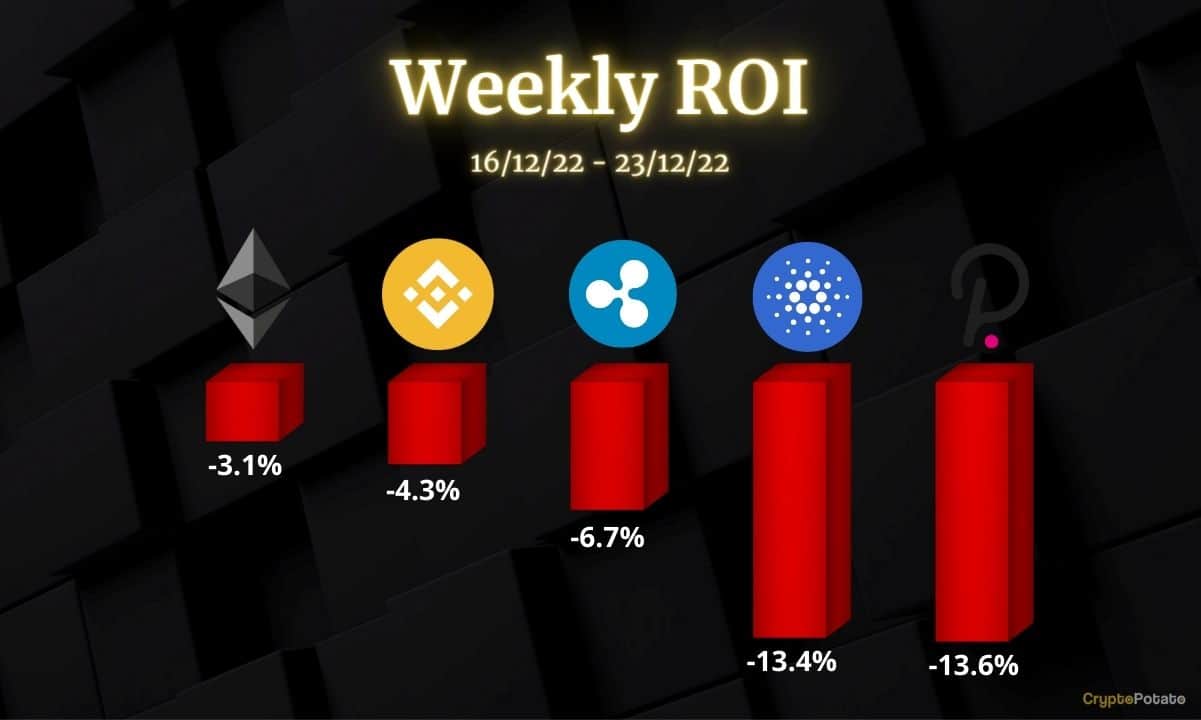 This week, we take a closer look at Ethereum, Ripple, Cardano, Binance Coin, and Polkadot

ETH fell by 3.1% in the past seven days after it lost the support at $1,240, which has now turned into a resistance. The bulls stepped up at $1,150, and since then, ETH has been trending upwards.

In the next few days, this cryptocurrency seems likely to attempt to reclaim the $1,240 level as support. However, to achieve this, buyers need to keep it up. So far in December, the bulls have been rather shy in taking over the price action.

Looking ahead, ETH did manage to stop the price from making lower lows in contrast to many other altcoins that fell to new yearly lows (see ADA and DOT below). This is a sign of strength for ETH. As long as the price does not fall under $1,100, then buyers have a good shot at pushing ETH higher in the new year.

XRP suffered a significant drop in price, falling by 6.7% in the past seven days. At the time of this post, this it appears to have found good support at $0.33, and the key resistance is at $0.36.

The good news for XRP is that its price did not make a lower low with this most recent drop. This gives hope that the worst might be behind us, and buyers may prevent a lower low from happening in the future.

Due to low volatility at this time, XRP could range between the key levels for a while before breaking out. To flip the bias to bullish, the price has to break above the resistance at $0.36 with good volume.

With a new low at $0.25 this year, ADA’s price action remains bearish after falling by 13.4% in the past seven days. Buyers simply vanished from the market, and they consistently failed to prevent lower lows. This does not inspire confidence.

The current resistance is found at $0.27, and it could be retested in the following days. If buyers fail to move ADA’s price above it, then that will be another bearish signal to market participants. This could then trigger even more selling and new lows.

The outlook for ADA remains grim. If bears continue to dominate the price action, then the next key levels of support below $0.25 will be found at $0.20, $0.17, and $0.15. These are also potential targets for the beginning of a sustained recovery once ADA’s price arrives there.

Binance Coin lost 4.3% in the past seven days. Despite this, buyers did manage to stop BNB from falling to new lows. With good support at $220, the price could end up moving sideways until volatility returns to decide the next steps.

The resistance at $260 was not yet tested. This could be interpreted as a weakness in the price action that already reversed at $250 from its bounce on the key support. It is crucial for buyers to sustain the momentum and push BNB above $260. Otherwise, the key support may be put under pressure again.

Looking ahead, as long buyers as manage to defend the key support at $220 and $200, then Binance Coin has a good chance to avoid lower lows this year which would be a significant achievement, similar to ETH.

Polkadot is the worst performer on our list this week after its price fell by 13.6%. In the process, DOT also made a lower low this year, similar to ADA. However, there is hope for a bounce in the near term as the current price action has formed a bullish wedge (represented in blue on the chart).

Should the support at $4.4 hold, then DOT could attempt to rally towards $5 and range in the near future between these two key levels. If the price falls under $4.4, then that would turn the chart extremely bearish, and DOT could fall to new lows again.