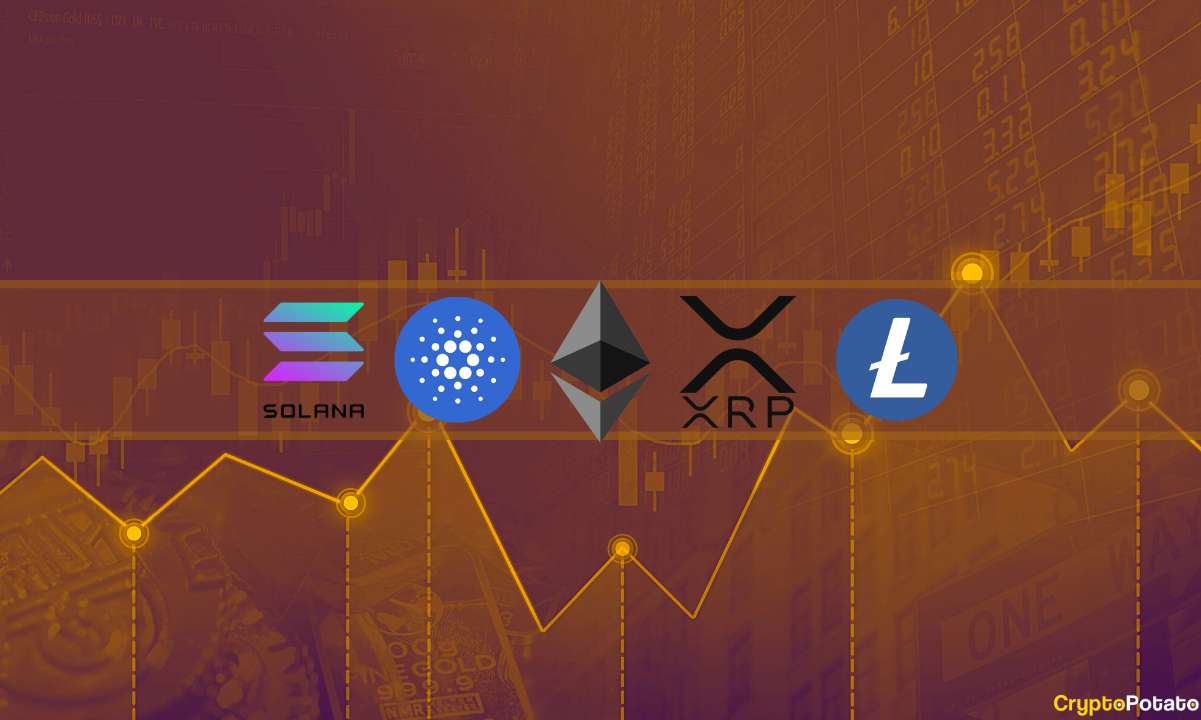 This week, we take a closer look at Ethereum, Ripple, Cardano, Litecoin, and Solana

This Wednesday, the bulls took over the price action and pushed ETH all the way to the key resistance at $1,260. Since then, the price seemed unable to break above. Nevertheless, Ethereum still managed to book a 3.8% increase in the past seven days.

The fact that in the past two days, the price has been rather timid in pulling back from this most recent rally suggests that sellers are exhausted or lack interest at this moment. This could turn into a key opportunity for the bulls.

Looking ahead, ETH is giving good signals that buyers are in control with higher lows and higher highs in the price action. Should they maintain the momentum, the next critical level to watch for is $1,365.

In complete contrast to Ethereum, XRP has been making lower lows after a significant decline on Monday, when the price briefly hit 30 cents. This led to a decrease of about 2.2% during the past seven days.

This week, the volume is in red, and sellers dominated the chart. This gives little hope of a reversal at this time, particularly when the key support at 33 cents is put again under pressure. Considering this price action, a break to the downside seems somewhat likely.

Since the spike on Monday could be indicative of things to come, it’s quite likely that XRP will have to revisit the 30 cents support before it can hope to reverse the current downtrend. Buyers don’t appear confident to stop this selling pressure.

Cardano surprised the market this week with a strong performance that saw the price increase by 11.4%. This momentum could continue, but the key resistance at 30 cents will be an important obstacle to overcome.

After finding good support at 24 cents, ADA managed to quickly recover some of the recent losses and continued to move higher every day. The volume and indicators support a continuation of this price action, but it’s important to see how buyers will manage the above mentioned resistance level.

LTC is one of the oldest altcoins on the market, having been launched in 2011. While it may not be flashy or new, its price action of late has been quite impressive. Litecoin managed to consistently move higher since June 2022. This is something few altcoins have achieved during this bear market.

Somehow, Litecoin has closed the past week with a price increase of almost 10% after breaking above $70 once again. Bulls appear keen to push this higher cryptocurrency, and they could even challenge the key resistance at $80.

Looking ahead, LTC is one of the few cryptocurrencies that are well-positioned to make higher highs. Right now, its biggest challenge is to break above $80. Perhaps this second attempt may be successful, which could put the cryptocurrency on the path towards $100.

Solana’s price action in the past 30 days can only be described as a crypto roller coaster. After falling under $10, it quickly rebounded and entered a significant rally on Monday when the price spiked higher, closing the past seven days with a 37% increase. This makes it the best-performing altcoin on our list this week.

After finding great support at $9.5, Solana entered a sustained rally that did not stop until $14. The key resistance is found at $15, and it would be even more surprising to see it break this level considering its performance this week.

Looking ahead, a test of the key resistance appears likely. But for this to happen, the overall market needs to turn bullish or at least stay neutral. Otherwise, Solana could be dragged down back to $10.