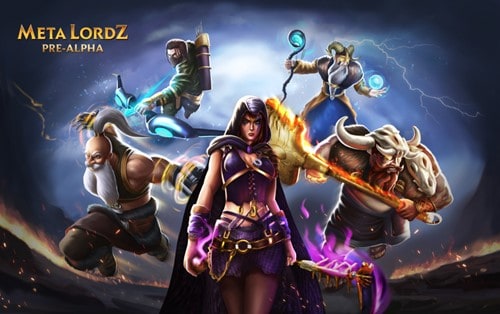 Meta Lordz is inviting metaverse adventurers to team up with fellow warriors and fight enemies of the realm. Intrepid explorers have the opportunity to defend Glasmire from intruders, level up and become legendary warriors in the battle arena while having fun and earning.

Built by gamers for gamers, Meta Lordz is above all designed to be an enjoyable, social and innovative game, with web3 elements enhancing players’ experiences. Meta Lordz aims to attract both web2 and web3 native gamers, hence the gamer-first approach to enhance the player experience.

Captivating gameplay and an immersive adventure are the foundations on which Meta Lordz is built as evidenced by the positive feedback received throughout the game’s recent playtests. Its blockchain integration comes with a strict emphasis on enhancing the game and overall user experience.

Players control a warrior and can choose between five existing classes, with more to come:

Each warrior is fully customizable and will not only face foes in the arena, but also fight alongside allies for ultimate glory. Each piece of equipment that is earned/purchased by the players adds to the power, level and value of the character. In addition to mastering battle moves, players must have a strategy to build their champion, adapt quickly to the warriors they will be pitted against, and counter other players’ strategies.

With spectacular PvP battle arenas, social trading, and RPG adventure modes, Meta Lordz has built an experience that allows for character progression and development. As players fight and win battles, their characters will level up, acquire new skills and evolve into more powerful champions. To achieve these goals, Meta Lordz has partnered with the NEAR Foundation and will be partnering with some of the most respected and foremost guilds.

The Meta Lordz alpha launch, which will be focused on a PVP arena experience, is scheduled for release on January 17th, 2023 and will be available to players all over the world free of charge. A beta launch will follow in Q2 2023 containing a wealth of new experiences including new characters, items and game modes.

Sign up now to have priority access to the Founders Pack collection before the game is released – https://go.metalordz.com/signup

Their medieval-themed platform will feature an expansive metaverse world, accessed by users with their NFT characters.

The town will be the portal to engaging games across a variety of genres, as well as extensive social & trading functionality, and other utility which plays a role in the gameplay experience.

The first game genre to go live in the metaverse will be a PvP MOBA-style battle arena game, in which players battle for supremacy, in a variety of match configurations, in exchange for rewards & rankings.