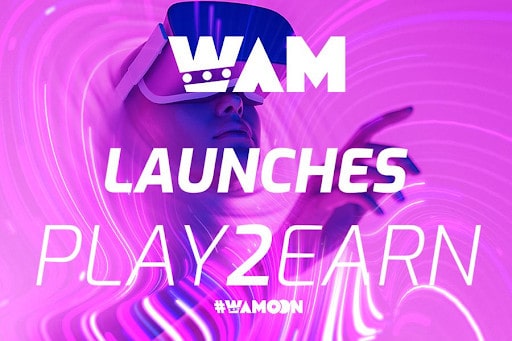 Make the blockchain your playground

WAM, the blockchain-powered gaming platform, has announced the launch of its play2earn feature within the WAM app, which will allow users to earn WAM coins by playing fun hypercasual games. This means that users who earned XP until now by playing their favorite games can now convert them into WAM coins.

Another super exciting piece of news is that after the beta version, WAM will make it possible for its users to buy WAM coins with a credit card. Connecting your wallet has become easier than ever before!

This milestone brings WAM closer to their mission, which is to ignite mass crypto adoption by building an easy-to-use crypto-gaming platform where users can pay with their credit cards to get WAM and participate in tournaments to earn more WAM.

The play2earn feature is a big step for WAM as it represents a real adoption of blockchain technology among gamers.

WAM believes that crypto is meant to be fun and easy to use, not just some speculative asset or trading tool. Gaming is a key element in this process because it enables people to interact with crypto in a more intuitive way than sitting on an exchange waiting for the price of assets to go up or down.

Crypto can change the game

Cryptocurrency has grown in popularity over the past few years, with many people using it for online transactions and investing. As a matter of fact, most of the gamers are actually coming from outside of the crypto world, searching for ways to earn money online and diversify their income while having fun.

The play2earn on WAM’s gaming platform is drawing attention from both crypto and gaming communities and is giving the hyper-casual gaming industry a boost.

There’s a plethora of hyper-casual games, but what makes WAM unique is this new play2earn feature that gives gamers control over their assets and earnings. A huge migration of hyper-casual players who want to actually earn something of value with their skills, is expected in the following weeks.

With the user in mind

WAM app has recently undergone a fresh redesign, created with usability in mind, improving both users’ interface, experience, and security at the same time.

In the near future, WAM wants to keep you and your friends entertained through team & clans battles. So choose your people wisely.

That’s right, you could compete against other groups of people in real-time. The best part is that you can live-stream the event—leaderboard updates and all—so your friends and family can watch from afar.

Download WAM right now on Android/iOS/PWA and play in tournaments to win crypto rewards – see for yourself have easy it is with WAM.

WAM is the first play-to-earn hyper-casual gaming platform where players compete in tournaments to win WAM coins and NFTs. The app has over 4.5 million users now and was nominated at “Best Innovation category” at the Mobile Games Awards 2021.

Their mission is to ignite mass crypto adoption by building a simple to use crypto-gaming platform where users can pay with their credit cards to get WAM and to participate in tournaments to earn more WAM.