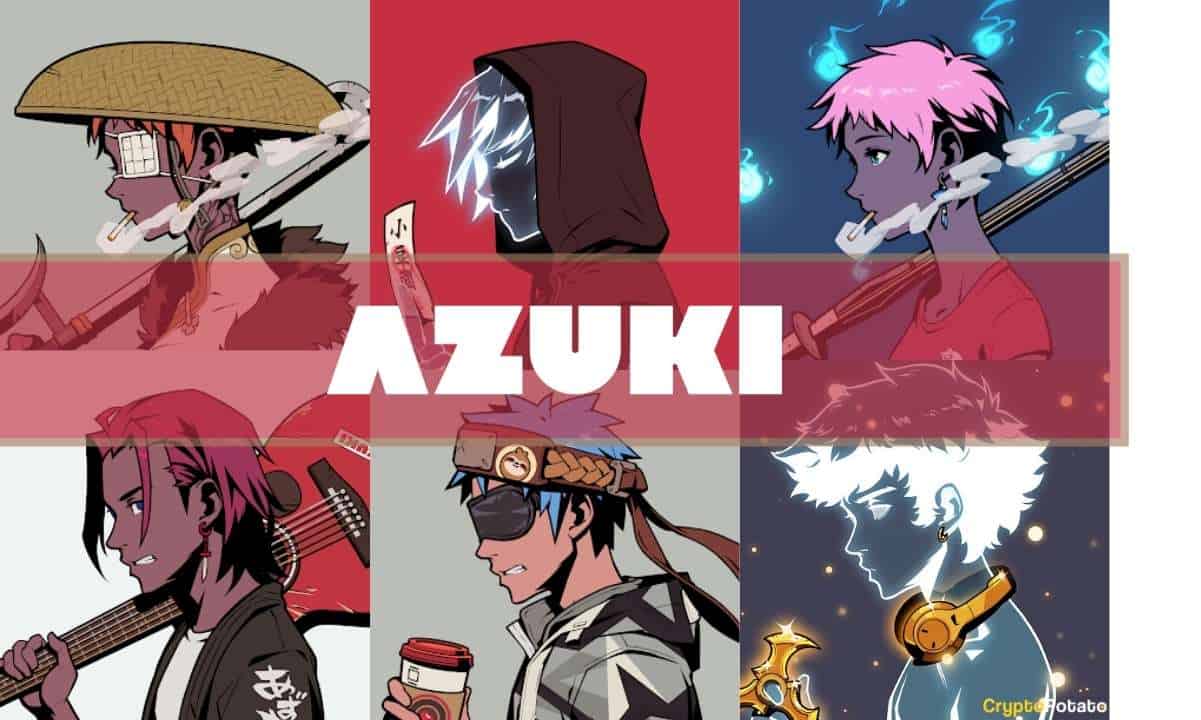 The Non-Fungible Token (NFT) ecosystem is moving fast. Hundreds of projects are created every day – some of them enjoy rapid success in the market due to their quality, uniqueness, communities, originality, art, and vision, while others flop quickly.

Talking about rapid success, Azukis – hand-drawn digital samurais and smoking skateboarders – have quickly turned into the next NFT blue chip.

In this guide, we take a closer look into the collection and everything there is to know about it.

What are Azuki NFTs?

Azuki is a digital brand mostly associated with its collection of 10,000 avatars released by a Los Angeles-based group of artists on January 12, 2022.

These avatars have unique characteristics based on anime-themed drawing, which has caught the attention of NFT enthusiasts around the world.

Owning an Azuki grants the user access to exclusive NFT drops, streetwear collabs, live events, and more as they become members of The Garden. The creators describe this place as a

“corner of the internet where artists, builders, and web3 enthusiasts meet to create a decentralized future.”

All Azukies have different traits regarding hair, background, clothes, and different wearables – some Azukies hold swords, a cup of coffee, a skateboard, or a Boombox. This is an example of some:

Azuki NFTs have become a pretty popular topic in the crypto community, not only for their anime-style aesthetic but also because they outranked some of the biggest names in the NFT market in terms of sales volume shortly after their release.

Azukies are just a few months old of being launched and have already garnered a considerable following. The collection is considered a blue chip within the NFT community among other popular collections like Bored Ape Yacht Club and CryptoPunks. Up until the time of this writing, its overall sales volume sits at slightly less than 190,000 ETH, currently worth some $540 million.

Before we jump into what is making Azukies so popular, let’s take a look first at the project’s history and its creators — we’ll also provide details about initial and current prices and how well they are doing in the NFT market.

Behind Azuki NFTs is Churi Labs, a startup composed of several members with vast experience in crypto, art, and gaming, all of them joining forces to bring a recognizable brand to the metaverse.

Most of them keep anonymous identities. And while their identities might be anonymous – their work speaks for itself.

The founder of the project goes by the online Twitter handle Zagabond. He claims to have worked with numerous industry-leading companies such as Google and various decentralized projects.

Other main members of the project are hoshiboythe lead designer, and Location Tbaa software engineer that claims to have previously worked at Facebook (META), and 2PM.FLOW – another engineer.

The Azuki team is highly secretive about who they are and their previous experiences. In this regard, Zagabond told Forbes:

Zagabond did say their identities would eventually be doxed, but for now, most of them will keep their personal information behind the curtains. Anonymous developers aren’t that uncommon in the crypto space, anyway – the team behind Bored Ape Yacht Club was also anonymous before getting doxxed.

Credited as a co-creator is also Arnold Tsang – a well-known conceptual artist from Toronto, Ontario. He is known for his previous work in the gaming industry, especially with the famous first-person shooter game Overwatch, backed by the American video game company Activision Blizzard.

Tsang, alongside the team, will work towards turning Azukies into something more than just digital collectibles — they want to build a sustainable business by bringing in new revenues to the company, including the launch of the Azuki clothing line, which is already being designed and issued, and hopefully reach TV shows and the film industry.

Azuki NFT Floor Price: How it Started and How it Goes

The collection sold out in a matter of minutes, registering about $30 million in sales. After the public sale, the creators held a private offering in which they sold sets of Azuki NFTs for another $2 million.

Quickly since the reveal, the collection’s floor price took to the skies and was already sitting above 10 ETH less than a month later. However, it wasn’t until late March 2022 when Azukis absolutely exploded in popularity, and their floor was inching towards 40 ETH.

This also led to the sale of the most expensive Azuki NFT (at the time of this writing). It was the Azuki #9605, ranking second according to TraitSniper. The collectible sold for a whopping 420 ETH worth over $1.4 million at the time of the sale. This is what it looks like:

Why Are Azukies So Popular?

There are plenty of reasons why Azuki became a blue chip in the cryptocurrency community in such a quick fashion. Number one, in the eyes of most people, is art. It occupied an important niche within the field of NFTs – anime – and it set the standard for hundreds of projects after it. The Avatars are aesthetically pleasing, and in the words of Zagabond – it just “resonates” with the audience, especially in Asia, where anime is a lot more popular.

“I’ve had a couple of conversations with Asian investors who told me that this was the first NFT that they purchased.”

Tsang, on the other hand, says that Azukies capture the “rebellious culture of skateboarders,” adding that it connects well with the crypto community.

It’s also important to note that the overall market strategy of Azuki seems to be working pretty well. Once the series started catching speed, the team announced a much-anticipated airdrop to its holders, rewarding them for their loyalty while also furthering the Azuki brand and taking it to another level.

At the time of this writing, there’s not a lot to be said about the BEANZ collection as there’s still a lot that the team hasn’t revealed – which is another reason for the project’s status as a blue-chip.

BEANZ is a collection that hasn’t seen its reveal yet, as the beans themselves remain unrevealed. They were airdropped to Azuki holders on March 31st, and each holder received two brand new NFTs. Each holder received two BEANZ. At the time of this writing, they have a floor price of 5 ETH worth around $14,000 each.

Introducing BEANZ: a small species that sprout from dirt in the garden. Being a sidekick is in their DNA, although some like to kick it alone.

They’re earnestly driven by the desire to help. However, certain BEANZ feel a calling to pave their own path.

Once born, users will be able to pair BEANZ with their Azukis without changing the original NFT. So far, only two of a total of ten BEANZ characters are revealed:

Where to Buy an Azuki NFT?

LooksRare and OpenSea are the two most popular options to buy from the Azuki collection. If you’re planning to use OpenSea, remember you need to connect your self-custody wallet like MetaMask, Coinbase Wallet, or other available options.

You can check our guide on the best non-custodial wallets here.

Once you have the wallet connected, you need to find the official collection (just type in “Azuki” and navigate to the collection with the blue checkmark on it). Find an NFT that you want to buy, click on it, and hit the Buy button – it’s that simple.